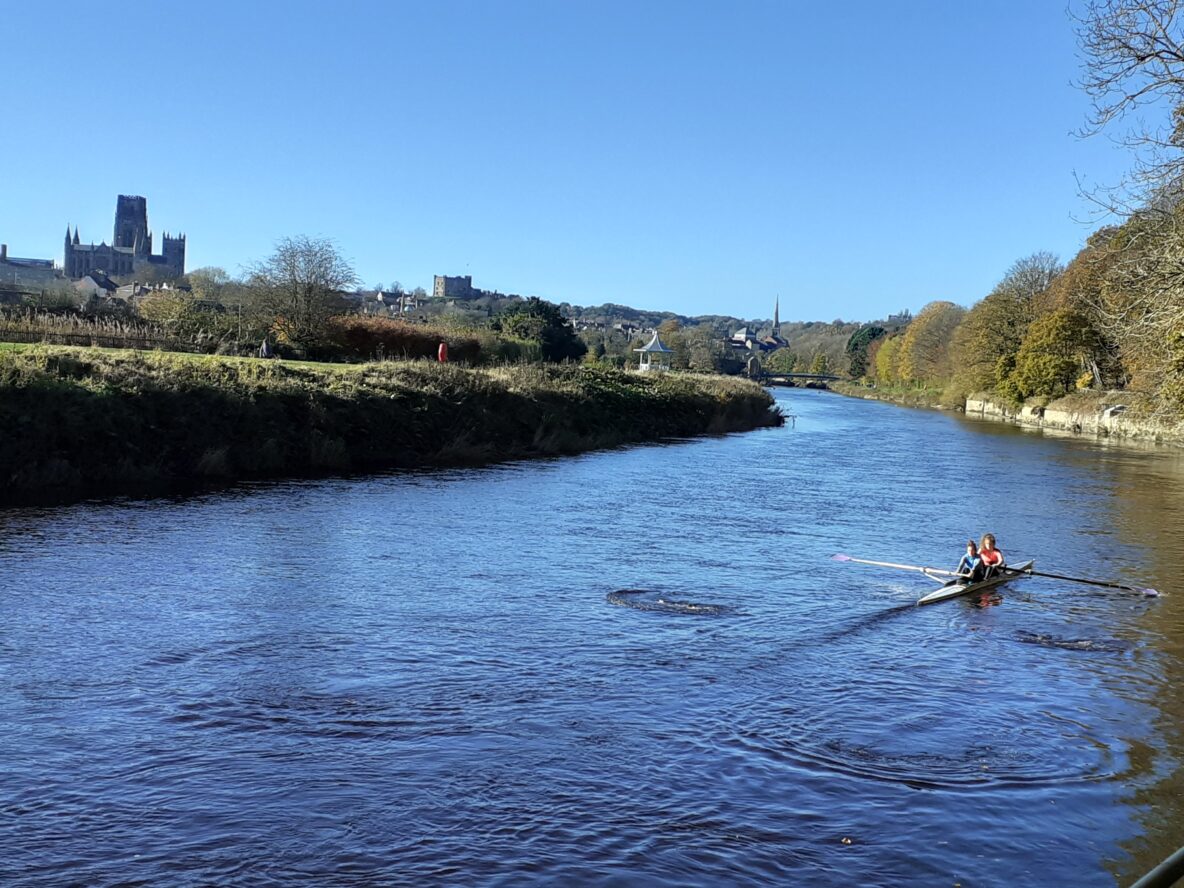 Durham Regatta has been acting as the liaison organisation for the main users of the River Wear in Durham in the relationship with the Environment Agency (EA) over the sustainable management of the river and in particular the movement of gravel and ‘dredging’.

Following the riparian survey of the River Wear in 2020, the issue of a Sediment Assessment report, and further discussions with the EA, consultants from Jeremy Benn Associates (JBA) have obtained a permit from the EA on behalf of Durham Regatta for a one-off capital dredge which allows the removal of gravel from the river for disposal and redistribution. The Sediment Assessment report supports the application to improve recreation along the racing stretch of the river. The proposed works will involve dredging sediments from shallow water areas to create a water depth of approximately 0.75 metres along the racing section of the River Wear.

The permit will only be validated once a method of works has been submitted and approved by the EA to ensure that the works do not result in any adverse ecological impacts. The Regatta will ascertain approximate costs from EA approved contractors with a view to commissioning the work, which the permit stipulates may only take place between June and September in order to avoid the spawning season for salmonids.

As with cost of the survey, the cost of obtaining the permit has been shared between Durham County Council, Durham University, Durham Amateur Rowing Club (DARC) and the members of Durham Regatta, to whom we are most grateful for their contributions. Any future work will require additional permits as agreed within the previously accepted sustainable Gravel Management Plan (GMP).

Under Water Framework Directive (WFD) legislation which came into force in 2000 all surface and ground waters in England and Wales are required to achieve Good status by 2027 to protect the ecological condition of waters. The survey considers the River Wear from Croxdale Beck to Lumley Park Burn, which has been assessed as having Moderate ecological potential. The objectives of the WFD also include promoting sustainable use of water as a natural resource, conserving habitats and species that depend directly on water, reducing pollution and mitigating the effects of floods and droughts.

The GMP was produced originally in 2010 and considered options for the sustainable management of sediments/gravels along the river. Sediments and gravels are repeatedly deposited within the reach between Maiden Castle footbridge and Baths Bridge, and can be attributed to the heavily modified river course.

The River Wear in Durham is impounded and modified by weirs and historic channel management. As a result of in-channel barriers, sediment transport processes are disrupted which leads to sediment build up with the river channel upstream of barriers. 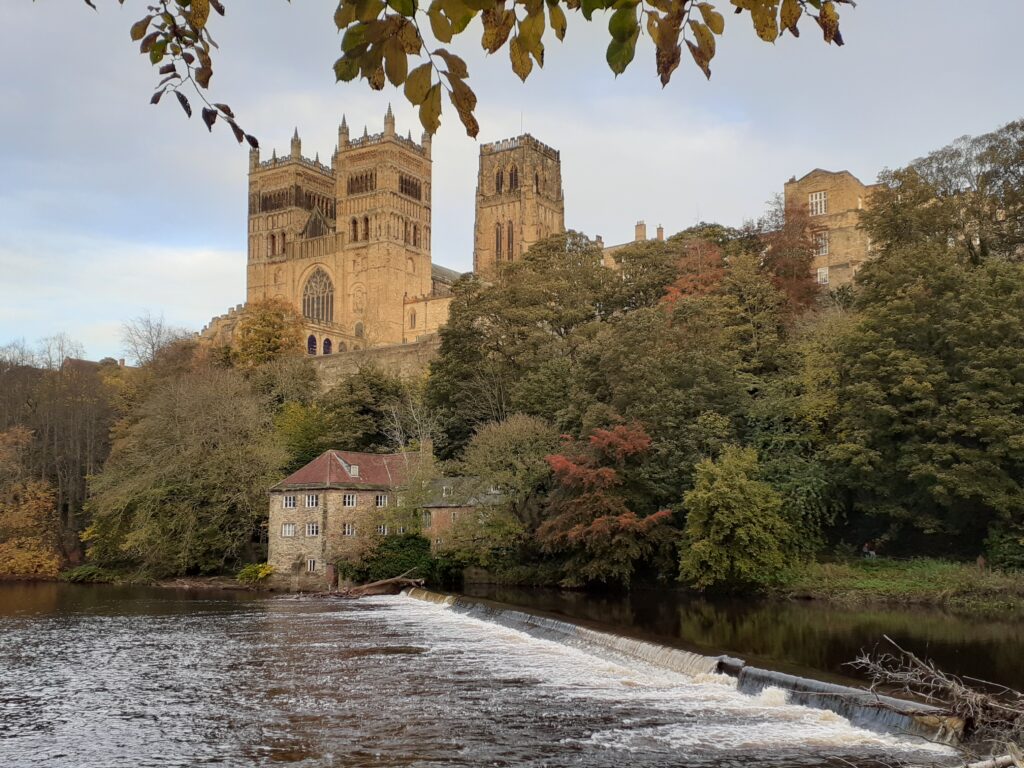 The weirs were created originally for industrial purposes. At the eastern end of the first weir below Prebend’s Bridge, known to have been in existence by 1172, was the site of a Corn Mill belonging to the Bishop which supplied the Castle, while at the western end was a mill providing flour for the Convent in Crossgate. The weir was maintained at the common cost of the Bishop and the Convent. In the 15th century a Fulling Mill was established next to the corn mill.

Below Framwellgate Bridge is another weir, at the eastern end of which stood the Bishop’s Mill, believed to have been in existence since the 12th century, although rebuilt several times since as a result of flood damage. An Archimedes screw now stands next to the weir and drives a turbine and 100kW generator supplying power to the Freemans Reach development. The screw and adjoining fish pass installation were specified and designed by the design team at Renewables First. The River Wear is important for salmon and sea trout passing both upstream and downstream, and the hydro scheme has been designed to improve the ecology by allowing fish to travel upstream more easily. Up to 20,000 fish are counted each year. Producing power since 2015 it is one of the first such schemes in the UK that generates electricity using a main river in a city centre. 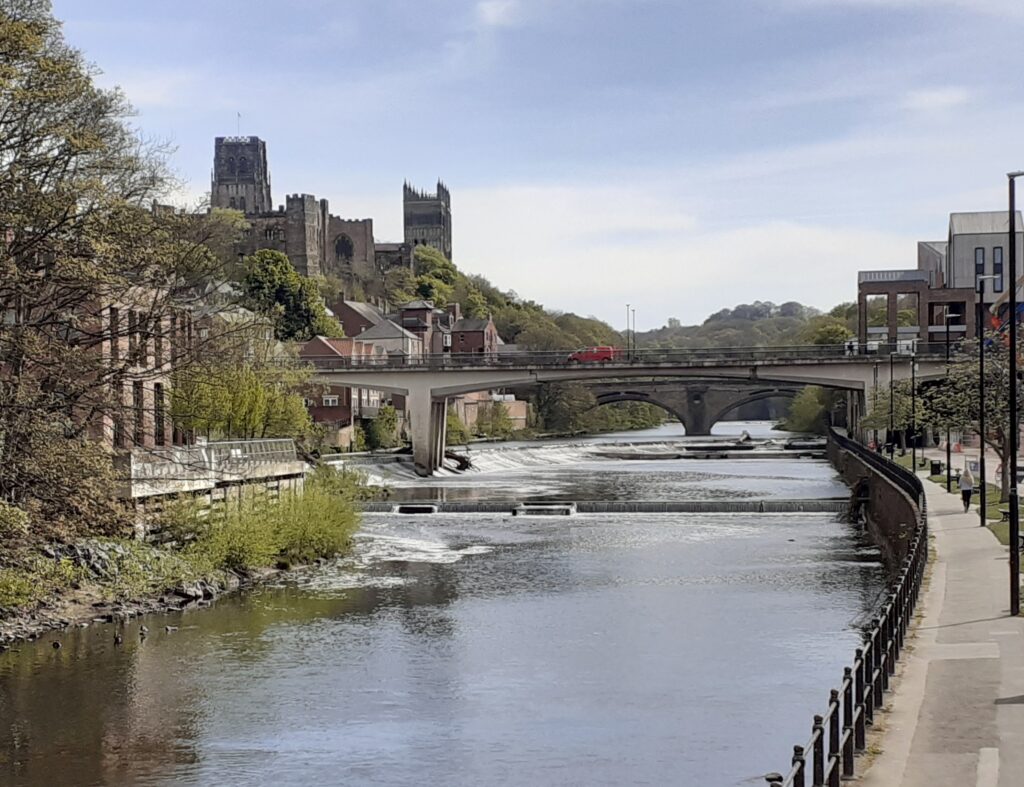 Threequarters of a mile below this second weir was another weir for supplying power to the corn mill attached to Kepier Hospital. From the 12th century the hospital provided for men who had become too old to work, as well as offering accommodation to pilgrims visiting the Cathedral. A notable guest was King Edward I who stayed overnight at Kepier in 1298 on his return from invading Scotland. Permission for the construction of the weir was granted to the Brethren of the Hospital by Bishop Nicholas Farnham in 1244. The name Kepier derives from Old English words for weir with a fish trap, fish being a staple of the monastic diet. The mill, which was used to grind corn from the Gilesgate estate to provide bread, was damaged by fire in 1870 and later demolished. Evidence of the weir has since disappeared following silting up of the mill race and accumulation of debris. 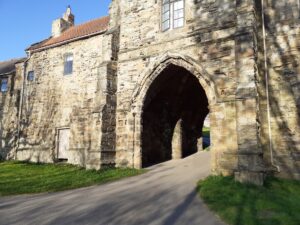 The Gatehouse of Kepier Hospital

The combined effect of the weirs in Durham is to remove 4 to 5 metres of gradient from the river locally, resulting in water backing up as far as Shincliffe Bridge 2km upstream, including the reach which is currently used for rowing.

The reach between Maiden Castle footbridge and Elvet Bridge has a highly altered morphology, with engineered banks to support the intense public use both on and next to the river. The presence of weirs creates a modified and impounded river channel which acts to create low energy conditions leading to sediment deposition. Sedimentation has reduced the depth to less than 30 cm during summer low flow conditions. With no impoundment there would typically be alternate sequences of deeper pools and shallower areas, similar to reaches upstream and downstream of the impounded zone.

The main concern for the Regatta is the large gravel bar that has developed on the inner bend along the left bank of the river channel. adjacent to DARC, which hampers boats returning from racing. This is a natural morphological feature and it is likely that it would have developed differently if the weirs were not present. Whilst the development of the bar may be slow it will always be present.

Rowing would not be possible without the weirs, as was demonstrated when the sluice gate next to Durham School Boathouse failed in 2017 and the water level dropped by 20cm overnight, exposing the bar downstream of DARC. The river was closed for around 3 weeks until the Dean & Chapter and the EA were able to effect a repair. 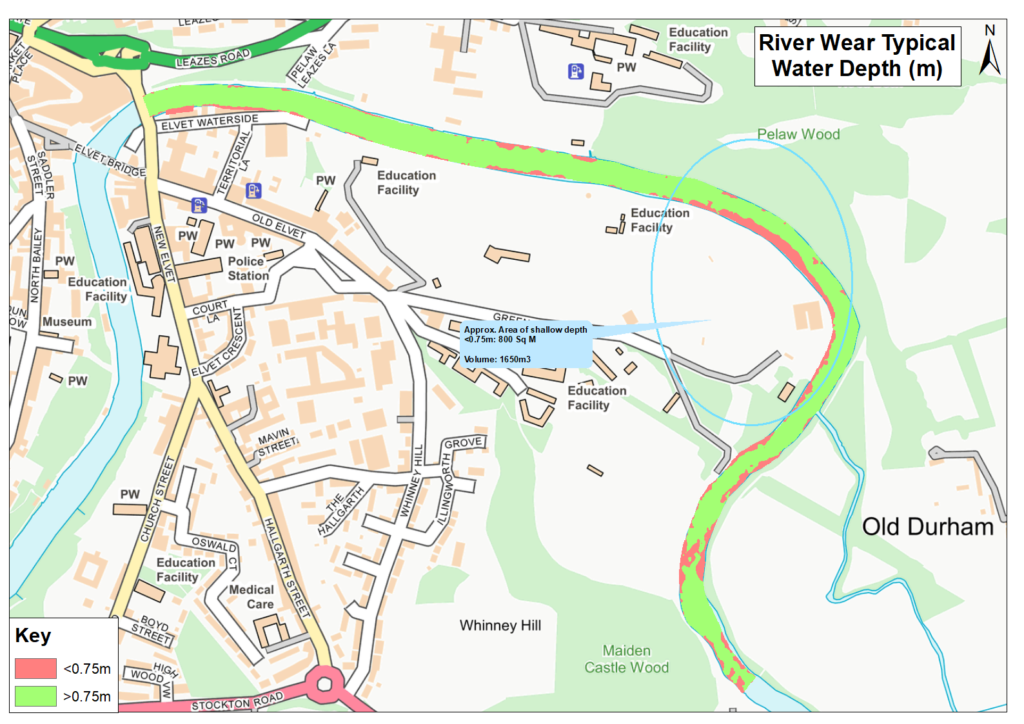 The Sediment Assessment report demonstrates that the proposed works will not cause any deterioration in ecological status. The WFD includes a quality assessment of habitat for species, which is currently assessed as Good, with mammals such as otters observed in the river in recent times. A plan for managing the spread of invasive non-native species (INNS) such as Himalayan Balsam and Japanese Knotweed is also included in the impact assessment.

In October the City of Durham Parish Council agreed to provide funding for the WINNS project managed by the Wear Rivers Trust to help eradicate invasive species from the river. The Wear Rivers Trust works with local communities to conserve, protect, rehabilitate and improve the landscape and watercourses of the whole River Wear catchment.

The EA has identified that areas upstream of DARC are important spawning beds and also support diverse aquatic vegetation, and these areas have therefore been withdrawn from the current scope.

Water classification data published by the EA in September 2020 indicate that only 14% of rivers in England meet the criteria for Good ecological status, which is the same percentage as in 2016. Collective action is needed from Government, water companies, farmers, businesses and the general public to improve this.

To maintain approximately 28 metres width of channel for rowing, the dredge profile will ensure a gradual stable bank is maintained with a minimum of 0.5m on the left bank, which can accommodate the slower moving returning race boats. Achieving a depth of 0.75m to enable safe rowing requires the removal for disposal and redistribution of sediments from shallow water areas. A maximum of 1650m3 of sediments will need to be removed for disposal, but it is likely that the actual volume removed will be much lower as sediments will also be redistributed to deeper areas, in line with the GMP.

Thanks to the work of JBA Consultants the Directors and Committee continue to strive diligently to bring about a sustainable solution to the sedimentation issue, and though limited in terms of funds, the Regatta’s role will be to seek the engagement of stakeholders to deliver the agreed aspects of the Gravel Management Plan. We will move forward once we have a better idea of likely costs and the availability of contractors, and a clearer picture of the prospects for rowing and regattas for this year as the pandemic situation unfolds. Possible sources of finance could include grants, fundraising, contributions in kind etc. and any assistance in this respect would be very helpful.