Durham Regatta owes its origins to the procession of boats on the River Wear celebrating victory by the Duke of Wellington at the Battle of Waterloo on June 18th 1815, a scene vividly illustrated in the painting ‘Procession of Boats on the Wear at Durham’ by Edward Hastings (1781-1861) which is in the the Durham University Collection and can be seen on display in Durham Castle.

The commemoration took place annually around the date of the battle when Waterloo-men would march through the historic city-centre and the Racecourse would resound with thundering cannon salutes.

Competitive racing followed soon after the founding of Durham University in 1832 when oarsmen from the Tyne, Wear and Tees were invited to compete and the first Durham Regatta took place in June 1834 with the University as a founding member. It is the second oldest rowing regatta in the country and continues to take place by tradition on the second weekend in June.

The painting depicts the scene at Elvet Bridge through which spectators can still watch crews racing on the Long Course on the Sunday of the Regatta. 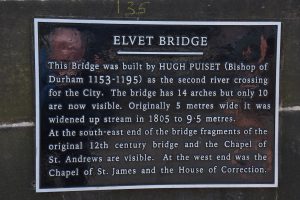