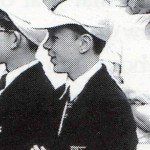 regatta over the years, taking on all sorts of roles and doing them all exceptionally well”, says Doug Stewart, Durham Regatta President

Durham Regatta looks forward to honouring and thanking Keith Yates for his service to the Regatta at the Presentation of Prizes in DurhamTown Hall on Sunday 9th June.

Very much a local, born in Langley Moor, Keith Yates spent his first twenty two years living right in the centre of DurhamCity in the Market Place above Barclays Bank. He started coxing at the Johnston Grammar School in 1951 and came to his first Durham Regatta two years later with the school crew in 1953. Four years on he joined Durham Amateur Rowing Club and coxed them to five successive North Eastern Championships and into the European Games Trials Final at Henley. With Keith in the cox’s seat, DARC swept the board at Durham Regatta in the late fifties and early sixties, winning five ‘Grands’ (the Grand Challenge Cup) and four ‘Whartons’ (the equally prestigious Wharton Cup) in five years. 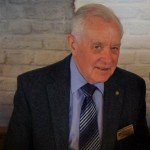 While Keith may have left the city in 1962 for Nottingham, where he set up and ran his own printing company, he has returned to Durham Regatta every single year since. His success as a cox, for DARC and other crews, continued over the years and Keith is now the proud owner of over fifty ’pots’.

But it is as a commentator that most recent, and not so recent, visitors to the regatta will know Keith, a role he has been performing since 1976.

When you hear Keith’s distinctive voice, gently bemused by the wayward course taken by a cox unused to the twists of the River Wear or resonating to the excitement of a close race fought all the way to the finish, you are listening to a slice of history – fifty years of Durham Regatta.