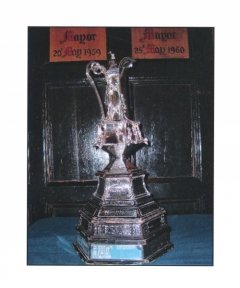 Durham Regatta originated from the 1815 celebration of the victory at Waterloo. The annual procession of boats became a regular feature with the boats carrying bands up and down the river, playing “Rule Britannia” and music of the day. As the day wore on the music became “more spirited … but less harmonious”. 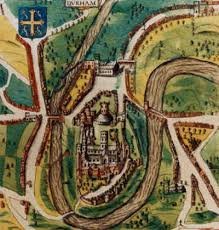 The first Durham regatta in 1834 saw 2 days of racing. But what was the format, and what were the rules? Well – there were no rules! Fouling was allowed as there were no heats, and as many as nine boats used to start abreast at Prebends Bridge, as the cannon fired, race through the narrow arches of Elvet Bridge, turn around a buoy at Pelaw Wood and return to Prebends. That must have been quite a sight.

This year marks 160 years of The Grand Challenge Cup, which dates from 1854 and has always been the most coveted prize at any regatta in the North of England.

An extract from “Sport Ancient and Modern” from the early part of the 20th Century describes the unique course:

“The Course was not quite a mile and a quarter between ‘Ash Tree’ and ‘Counts Corner’ … despite many gallant contests, it cannot be described as an ideal course for racing. The river at Durham is torturous, and except when swollen by floods, shallow and sluggish … there are two long corners, and about half way the course is spanned and well-nigh barred by Elvet Bridge.The quaint narrow arches of this beautiful and historic structure barely leave room for the oars of a racing boat.” 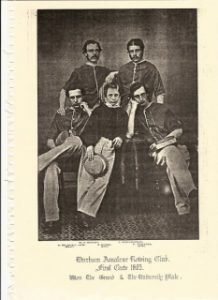 There has always been a ‘healthy rivalry’ between the 3 home crews from Durham – Durham School, 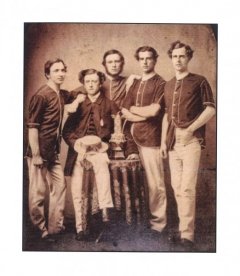 Durham University, and ‘the City’ (D.A.R.C.), with each winning the Grand on many occasions. In 1860 the University 1st four were victorious. At the time the university was suffering from dwindling numbers so the win was very welcome.

By 1880 the Grand was renowned as “the big event of the day, a four-oared race for gentlemen amateurs over one and a quarter miles”, and Durham Amateur Rowing Club won the 32 guineas prize (about £3400 in today’s money)

A wonderful print from that year (with thanks to the Peter Jefferies collection) shows the racing and some boating chaos on the Wear – not much different then!

All that was left

A far more poignant memory of the Grand concerns a crew from Bede who had won the Grand in 1910. This excellent crew (R.Wheldon bow, R. H. Robson 2, J. O. Wilson 3, C.E. Walker stroke and cox A.W.Bramwell), won the cup by three-quarters of a length, after fouling an arch and went on to form part of the contingent of Bede men during the First World War …

The 8th battalion of the Durham Light Infantry joined the British forces in France in April 1915. “A” Company of 8 DLI was known as the Bede Contingent, comprising over 100 past and present students of the college. They were soon thrown into the front line trenches on Gravenstafel Ridge during the second battle of Ypres.

The Bede spirit was not quenched by their first experience of gunfire. The official regimental history records that ‘through the darkness came the voice of some irrepressible BedeCollege member of “A” Company as a shell passed over’: “Aye it reminds yer of Durham Regatta. Now lads, up goes another! All together! Bang! Mind the stick!” Then someone called “Who’s won the Grand?” And there were rival cries of “City!” and “Bede!”

In the fighting which followed on April 25th, the Bede men helped save Ypres, but they suffered grievous losses with 17 killed, 10 wounded, and 31 taken prisoner. The group photograph with the poignant message, “All that was left” is arranged rather like the sports photographs of the day and has become part of the folklore of the college and the regiment. 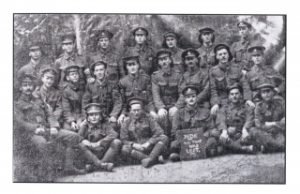 The Bede men had good reason to wonder about the Grand at Durham. The regatta would have been due within a week or two. It would not have been forgotten that Bede had won the Grand Challenge Cup for the first time in 1910, and some of that crew were undoubtedly in the contingent. Bede College had also won events at the regattas in 1913 (The Lady Herschell Plate) and 1914 (The Mayor’s Plate), so their prospects were good.

Of the Bede crew who had won the Grand in 1910, R.H. Robson was killed, R. Wheldon lost an eye, and the cox A.W. Bramwell became a prisoner of war. R. Wheldon is in the photograph.

There was no Durham Regatta in 1915 because of the war.

With thanks to Gerald Blake – “150 years of Durham University Rowing” – The River and Rowing Museum.

Which of your 3 Grands was most memorable?

I think it’s always the first … and that was with Durham School in 66 (Tony Bailes cox, John Appleby stroke, Gareth Powley, George Nicholson, Geoff Potts bow). There was a Continental crew that came over – Swedish – “Svenska”, there were around a few days before the regatta practising … and that was quite scary .. they had a short, high rating stroke, very much in the “Ratsberg” style of the day. The two weeks before the race, Bickmore (the pre-war Durham coach) wouldn’t let us row anything under 36. (rating) Bickmore was standing in for the coach of the time – De Winton, who had scarlet fever and wasn’t allowed anywhere near. There were very few new boats at that time, and we were in a 1934 ‘Bowyers and Phelps’.

Anyway, we beat Svesnka in the first round, we had 2 ½ lengths by Bede. Then we had Tyne in the final. The Head of House – McCall- had the whole school – probably at least 200 boys running the towpath. It hadn’t been done in a long time, and has never been done again. It was like a stampede, there were dogs and old ladies flying in all directions. We were on easy arch and won by 2 ½ lengths in a time of 6.02, but we weren’t pressed (the bogey time was always 6 minutes).

1969 With DARC. We knew we were going fast. We had won everything in the North-East and it was ours to lose. We had worked hard with weights and circuit training, back in 66 our idea of land training was running up the Chapel steps. We won comfortably.

1971 With Durham University. The same again. We had done the work – land training, weights, circuits, had truly arrived. We beat Tyne comfortably.

John Appleby and Kim Metcalfe from the 69 and 71 crews

Paul Rutter: I was only 19 and the rest of the crew were in their mid twenties, and here I was in the City 1st crew. We were in a plastic boat and had won everything that season – Senior A and Elite. We trained 3 nights a week, weights, running, and no alcohol.

There was a lot of banter at the start with the “pretty” DUBC crew, we were pulling their legs, and trying to psych them out. We had a lightning fast start and had clear water on the racecourse, maybe 3 lengths, it’s hard to know. I always remember passing the hot dog stall and how it took your breath away. We had great support down the first part of the course and then coming into hard arch, we maybe still had 1 ½ lengths. Tommy Madisson, the cox did a cracking job through hard arch maybe clearing the stroke side blades by 1 inch through the arch. And then supposedly we would pick up the advantage, from the rest of the course, with the bend in our favour. Perhaps, fitness came into it. At Kingsgate bridge, it was only a length, with the DUBC crew coming back at us around the outside of the bend, and down ‘Minute tree’ they seemed to be taking a foot every stroke.

Julian Ringer My memory of the race is that we shot off the start, took a significant lead by Browns where we were inspired by a huge cheer from Clive’s mates. The much fancied DUBC crew, who I believe went on to race in the semi-finals of the Wyfolds at Henley, suddenly picked up the pace having the benefit of the stream under Kingsgate bridge and came back like a train down ‘Minute tree.’

Tommy Maddison, taking no prisoners, hurled a significant amount of abuse/encouragement at both crews and took us over the line to win by no more than 2 or 3 feet.

I don’t remember much afterwards as we went straight to the bar with Messrs Duncan and Rutter and emerged only just in time, but in no fit condition, for the prize giving at the Town Hall.

1992 D.A.R.C.s last win. The crew was coxed by Toni Spoor, stroked by Mick Terry, with Richard Bodsworth at 3, Kevin Oates at 2, and Graham Wilson at bow.

Kevin Oates describes how the victory would go down in ‘the annals’ of club history.

The bow three were all home grown talents through the club’s links with Belmont school. As ever it was D.U.B.C. in the final and us Durham boys were surely not serious contenders to overcome ‘the polished palatinates’. As we left the landing stage I will always remember Angie Lund (club captain) telling us:

‘If you can win this one boys, you will go down in the annals of club history.’

Now Angie also happened to be English teacher for myself and Toni and Richard, so we knew all about the significance of the annals.

The crew was one of a handful I have rowed in that clicked from the off. There was nothing complex involved, just drop the blade in and push. Our strategy was simple, go off as hard as possible, push at the bridges and corners, and maybe the odd landing if required (that has the course covered). To our surprise, it worked and we led off the start, by Baths we were still ahead, and with Easy arch looming we squeezed on around the corner, knowing that DUBC had the course advantage in the second half of the race. As we shot Elvet with clear water, my mind recalled being in the same position, in a Newcastle University four a couple of years earlier and watching DUBC row through us. This time we didn’t falter, the crew just pressed on. Toni was screaming as we came down minute tree that we were going to do it. Maybe it meant more to us than DUBC but they failed to come back at us, and we won by clear water.

Amongst the celebratory expletives was a misquoted Captain’s comment that ‘our annals were going down in history!’
Innovations for this year

It may upset the traditionalists but this year’s regatta sees some exciting innovations to the racing format:-

I spoke to Richard Mortimer, the Entries Secretary.

Which events are involved, Richard, in the new style races?

Basically, it’s all the higher status events for Elite Performance competitors, and that includes Open Elite Eights, Womens Elite Fours, Elite Scullers, both Mens and Womens and, of course, the Grand Challenge Cup.

How will it be different?

Instead of a pure knock-out event, we time-trial the crews over the course, then use the results of the time-trial to seed competitors into 4 boat knockout events.

And how will that be better?

It ensures that the fastest crews are in the top events and like-speed crews are racing each other, which will mean some tight and exciting racing

Are there any potential downsides?

Maybe some confusion because crews won’t know who they are racing ahead of race day, but we expect that competitors will soon get the hang of the new format.

And this will also apply to The Grand?