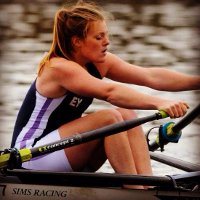 Former Durham Regatta commentator Camilla Hadland has held off competition from around the world to be selected as guest commentator at this year’s World Rowing Cup.

Applicants from Australia, New Zealand, Poland, Great Britain, the United States and Spain submitted audio files of their commentary on last year’s World Championships, and Camilla’s was chosen as the best.

World Rowing’s Sport Director Colleen Orsmond said ‘There was very little between the final scores submitted by the judges, but Camilla proved to have just a little more clarity and great race description’.

This is the first time that World Rowing has conducted a commentator’s competition.

Camilla joined the commentary team at Durham Regatta for the first time in 2017 and has also been a regular commentator at Henley Royal Regatta, Henley Women’s Regatta and at the British Championships. After a successful career rowing as a junior at Stratford-upon-Avon she graduated from Durham University in 2014 and was President of Durham University Boat Club in 2013-14.