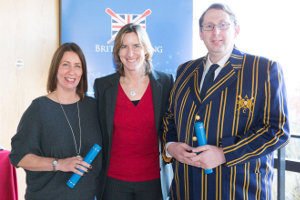 I don’t want to keep banging the drum, but it does take a very large number of volunteers to run the two day Durham Regatta each June. There are marshalls, umpires, commentators, race control, people manning the stake-boats and ticket booths, the workforce who set up and dismantle ‘the site’, and of course, scores of others in all of the food and bar outlets. For some volunteers, it’s a year round planning process.

British Rowing’s Volunteers of the Year for 2016 took place at a lunch at the River & Rowing Museum at Henley-on-Thames on February 4th. This awards ceremony recognises the volunteers who make a significant contribution to the sport. The winner of the Event Administration award for the Northern Region, on behalf of Durham Regatta, was our own Richard Mortimer of Durham ARC.

Richard first raced in the Regatta in 1990 but from the mid-90’s became more and more involved in the administration side. From 1996 he became involved in the complex task of timetabling the regatta, and this is his 22nd year. He has held the post of Entries Secretary since 2003. 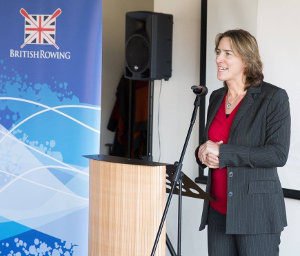 Richard has been a big proponent of putting rowing online, creating the first “Rowing in the North of England” website in 1994, and he first published the Durham Regatta draw and results online in 1995. The culmination of this work is now a system that allows the gathering and publishing of the results as they happen throughout the day. Richard also qualified as a National Umpire in 2000 and is one of the regions’ most active umpires. From 2015 he became Secretary of the Northern Regional Umpiring Committee.

Dame Katherine Grainger, Britain’s most-decorated female Olympian, who presented the award, emphasised that she couldn’t have got to the level she did without the countless volunteers who helped her along the way.

“Whilst a lot of hard work goes into organising Durham Regatta, it is gratifying to see the smiles on competitors’ faces at the end of a long weekend racing. And some of those people have gone on to compete at the highest level and win medals at the Olympic Games.”

As Richard’s success story shows, it is people that make Durham Regatta possible. We really appreciate the work of all of our volunteers and welcome new ones. Why not volunteer at Durham Regatta 2017?