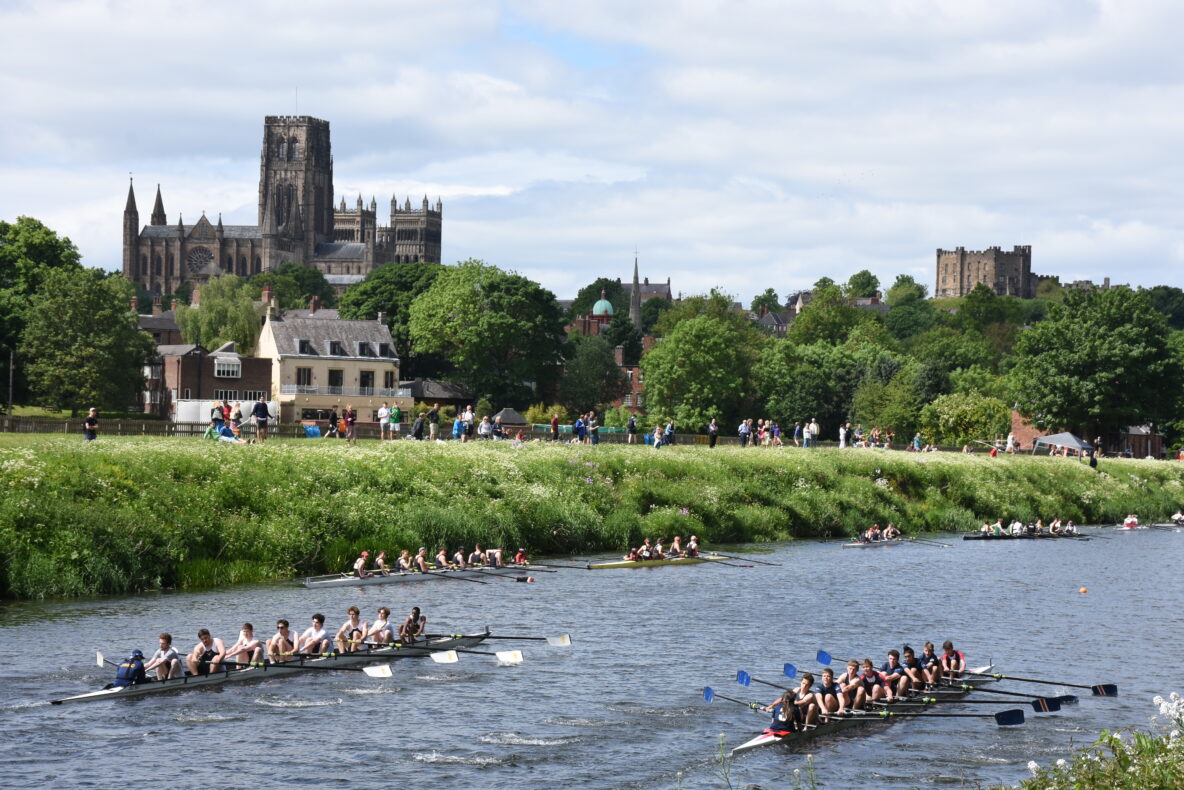 Two blank years on from the success of 2018, Durham Regatta faced more challenges than usual if a third cancellation was to be avoided. Heavy rainfall the day before the 2019 Regatta had put paid to both days that year for the first time since 2012. The world then changed in 2020 as the Coronavirus pandemic escalated and a national lockdown made cancellation of the 187th Regatta inevitable. If this wasn’t enough a more local difficulty emerged with the commencement later that year of essential repairs to New Elvet Bridge, set to continue until the autumn of 2021.

Complying with UK Government Covid-19 guidance meant a ban on spectators at rowing events and plans therefore commenced on the basis of a racing-only regatta for 2021. This precluded the normal ancillary entertainments but avoided undue financial risk. On this basis a risk assessment was formulated early in 2021 and submitted for approval to the Safety Advisory Group of Durham County Council. 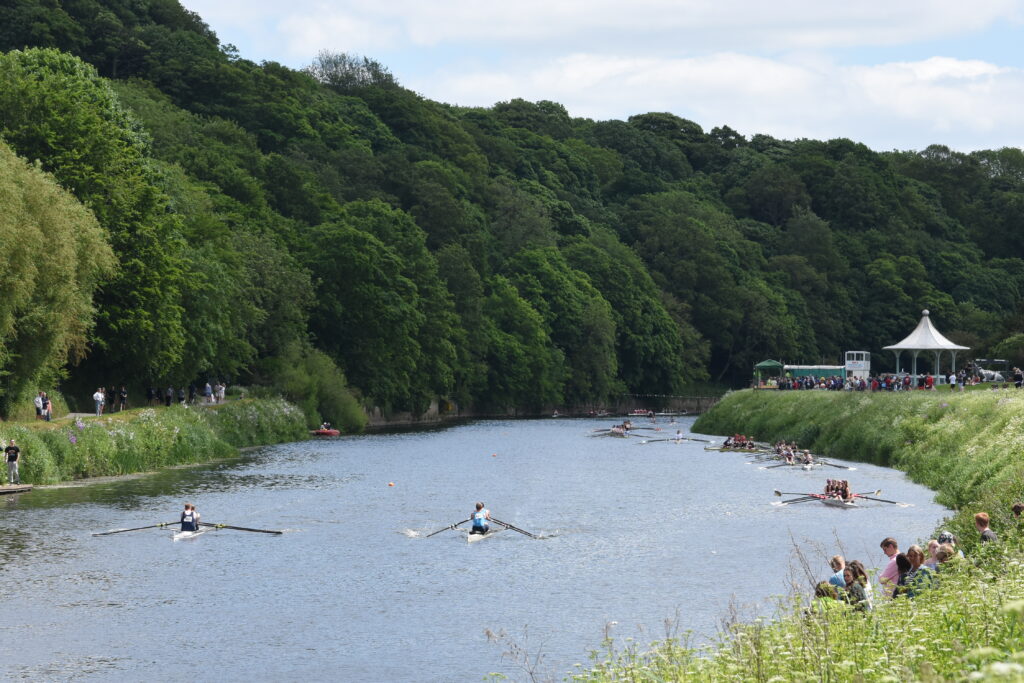 Planning for a Covid-secure event continued as approval was awaited. After feedback from clubs it was decided not to extend racing to a third day. A reduction in the number of entries was therefore required in order to satisfy Covid mitigations. Contingency plans were devised as another sub-plot developed when delays to bridge repairs introduced uncertainty as to which days and times the river would be open for rowing.

Outline approval to go ahead was received from the County Council some 3 weeks prior to the event with a major concern in light of the escalating Delta variant of the virus being the avoidance of overcrowding on the riverbanks. 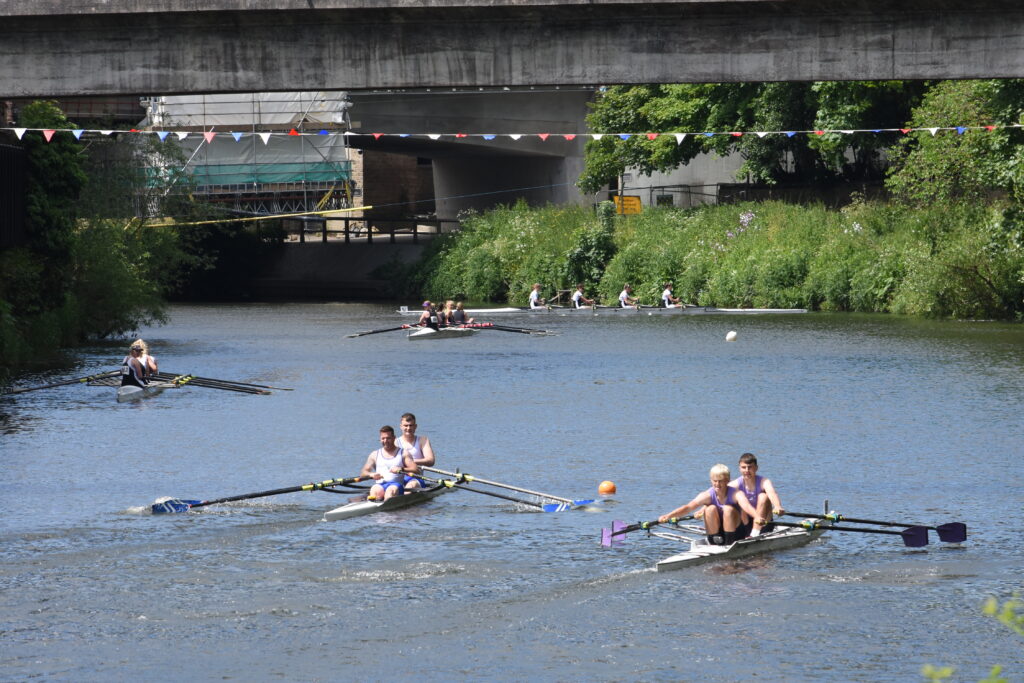 The decision by Durham County Council and contractors Balfour Beatty that a Saturday river closure under New Elvet Bridge was necessary meant a shortened course of 650 metres for Saturday races, to leave sufficient space for turning boats after the finish, but did allow the traditional long course races to go ahead on Sunday.

In response to modified land usage on the Regatta site the system implemented successfully in 2018 was repeated, whereby the Durham University rugby field was used as a boat and trailer park and all crews were asked to boat from the Durham Amateur Rowing Club landing stage, with a one way circulation pattern enforced, Additionally a ‘winner stays on’ system was introduced to minimize opportunities for land-based interaction and to speed up circulation on water. 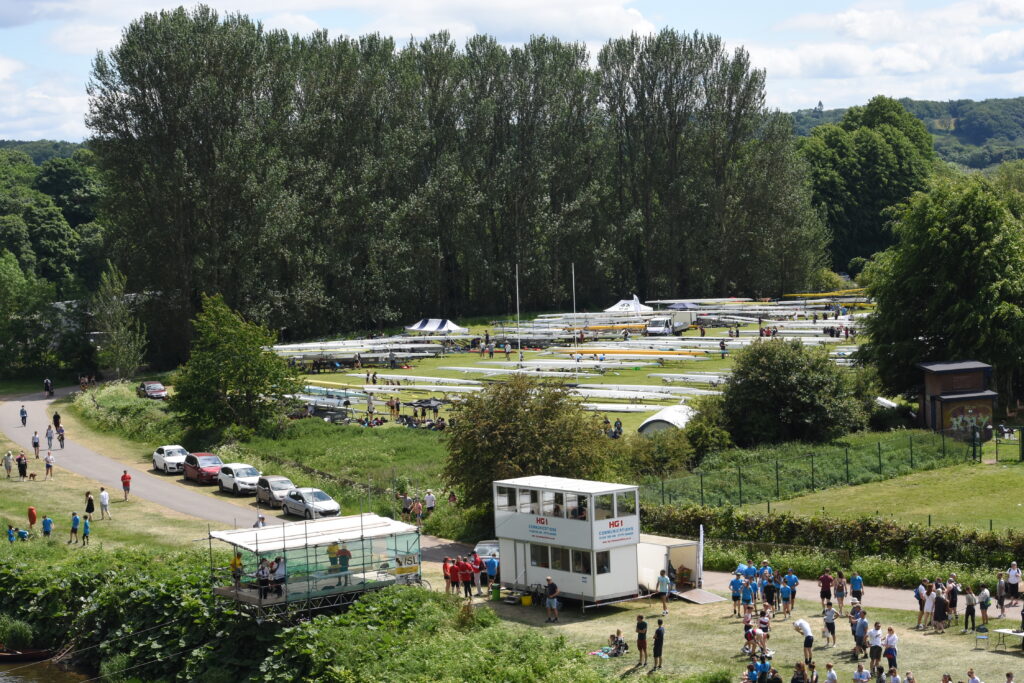 An added consequence of the Saturday river closure was the need for boats to be brought to the boat park by trailer from Durham School, St. Leonard’s School and the 6 College boathouses downstream of Elvet Bridge rather than them being rowed upriver and back again.

Because of the enforced closure of the clubhouse facilities at Durham ARC, catering for competitors was offered from the outdoor beer garden, with numbers controlled and a cashless ordering system in operation to comply with Covid guidelines.

A sunny but breezy weekend of racing got underway on June 12th. Spectators in the main heeded the instruction to stay away and thanks to the efforts of the many volunteers involved the event was hailed a great success by the competitors who took part.

On a more sombre note the funeral of Bill Parker who had been a great supporter over many years took place on the eve of the Regatta.

Despite opportunities for training over the past year having been severely restricted there was obviously no lack of enthusiasm and a very healthy entry was attracted. Entries opened on May 23rd and were suspended the following day. 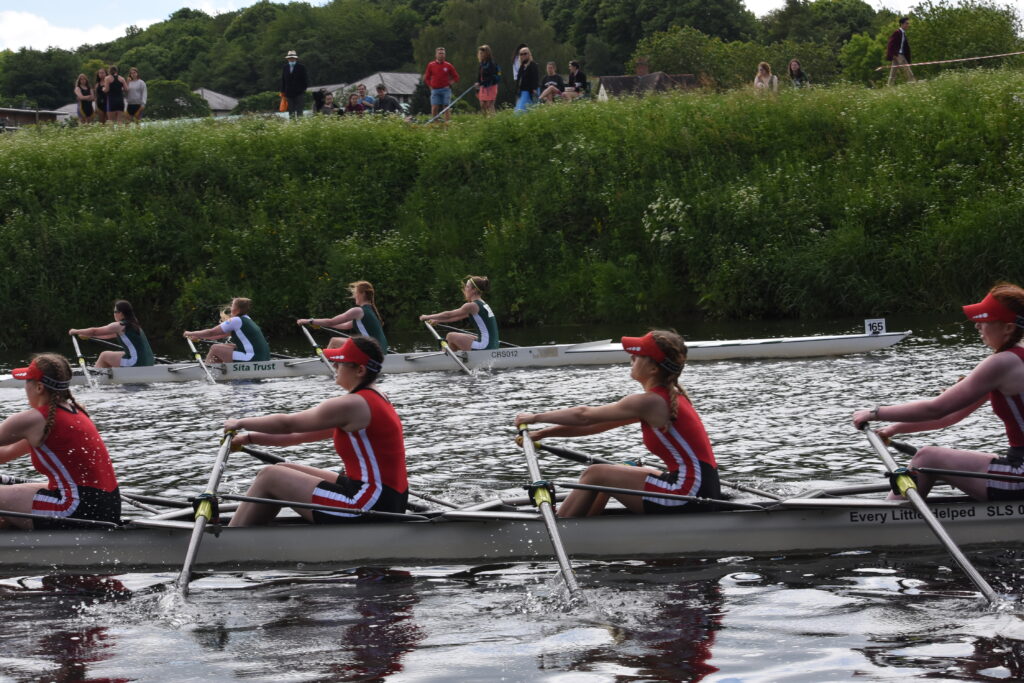 Saturday racing on the short course

Forty one clubs  were represented, competing in 51 events on Saturday and a further 51 on Sunday, with 447 races scheduled over the two days, although numbers eventually suffered a slight reduction as a result of scratchings following positive Covid test results. 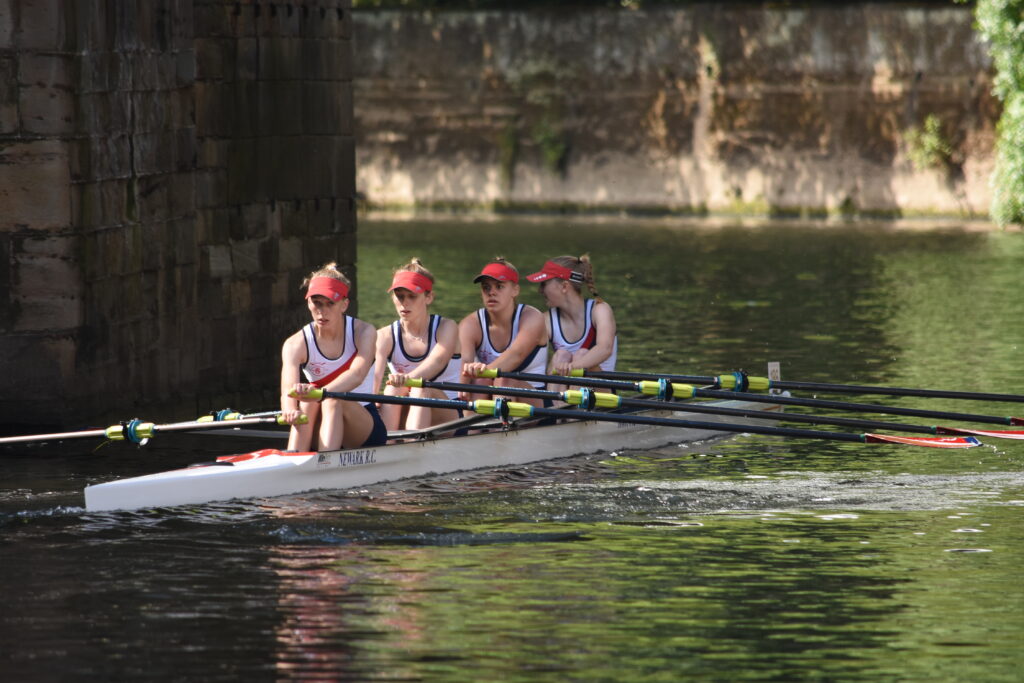 There was competition for Juniors from ages J13 to J18 on Saturday and J14 to J18 on Sunday, and in all boat classes for Seniors on both days, with long course Championship races on Sunday.

Masters competitors were restricted by the clash of dates with the British Rowing Masters Championships which again was scheduled for Saturday 12th, although entries were received in four Masters events on Sunday.

Racing fell behind schedule a little on Saturday after one or two early incidents but was able to get back on track later, although it would have been useful to have more volunteers with regatta experience.

More than half of the clubs who entered went away with trophies. The Women’s Beginner 4+ for the Mackay Challenge Cup on Saturday attracted 16 entries drawn from Universities and Durham Colleges as well as from local clubs and schools. After 4 rounds of racing the winners were Queen Elizabeth High School BC.

Chester-le-Street beat Sunderland City In the final of the J13 4x+ on Saturday. With no Masters competition being available on Saturday the closest final of the weekend came in the Women’s Elite 1x when Berwick’s Hilary Cairns was pipped by Becky Graham of Tees RC by half a canvas. 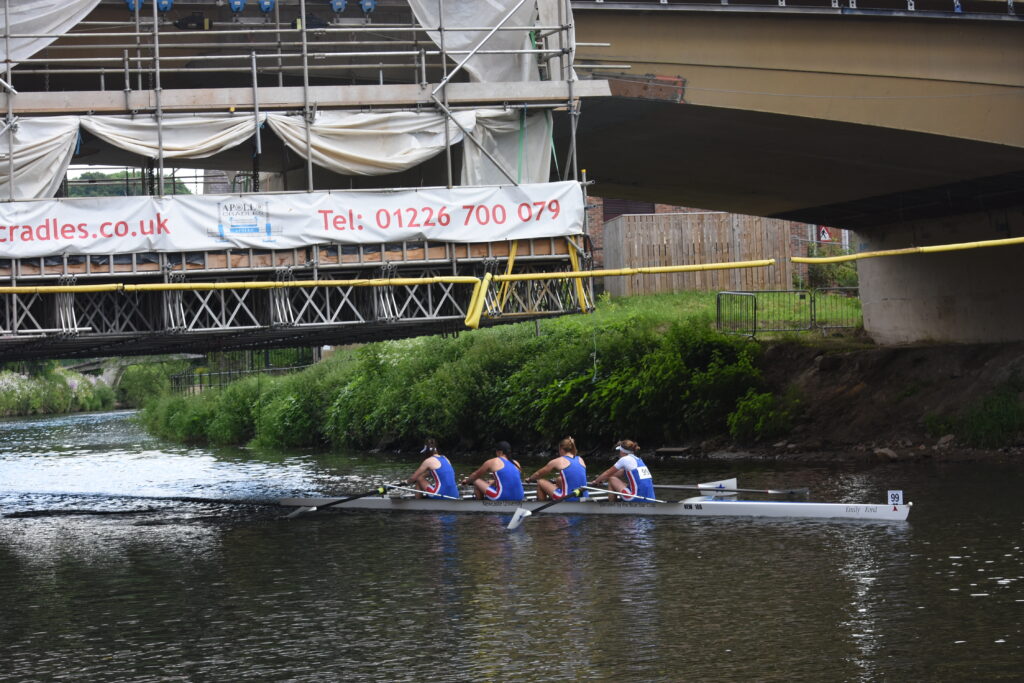 The Elite University squads used Durham as preparation for Marlow Regatta the following week and then BUCS Regatta and Henley. On Sunday, victory in the Blue Riband event, the Grand Challenge Cup for Championship coxed fours, went to Newcastle University BC who beat Tyne ARC in the final over the long course. NUBC followed up the previous weekend’s Boat Race of the North clean sweep over six 8+ races on the Tyne against Durham University BC by recording a further seven victories at Durham, including the Women’s and Men’s Championship 8+, Women’s Elite 4x- and 4+, and Women’s Championship 4x-, 4- and 4+. 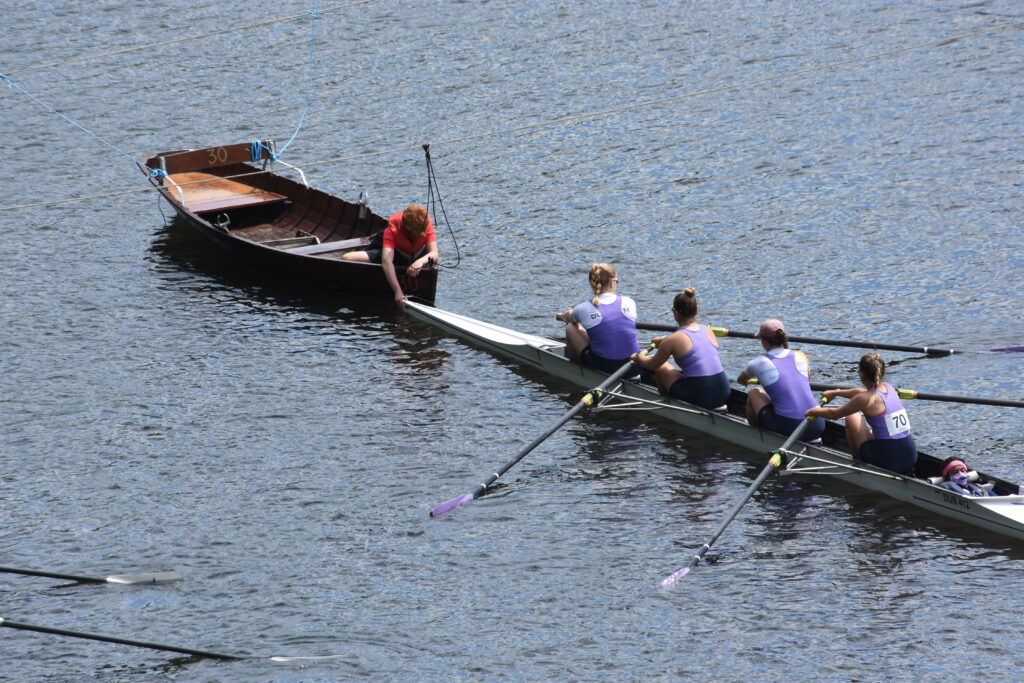 DUBC four on the stakeboat

Tyne ARC won the Open Elite 4+ on Saturday and the W Ch 4- and W non-Championship A 4x- on Sunday. 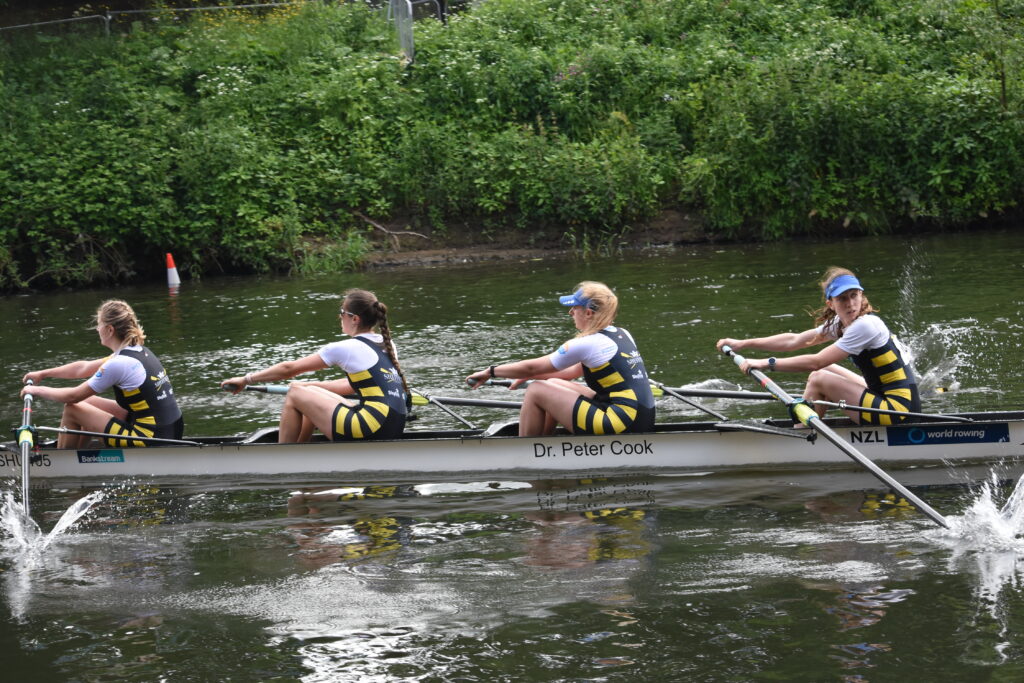 Sheffield University on the long course 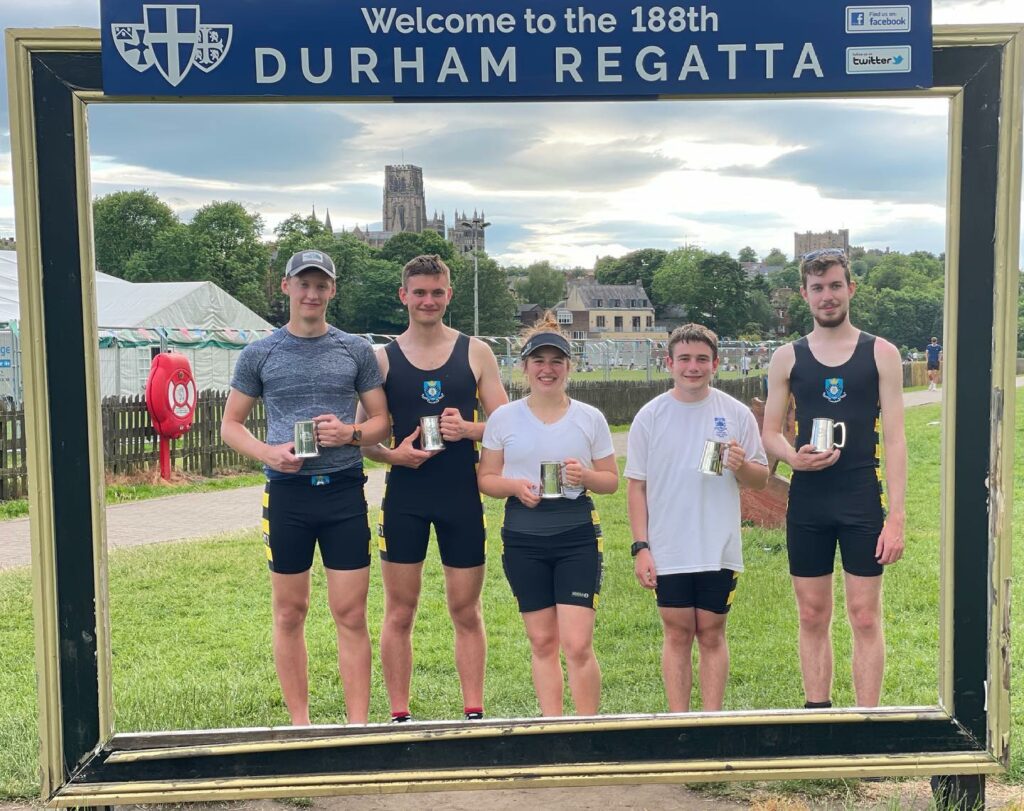 A summary of standings is shown here. 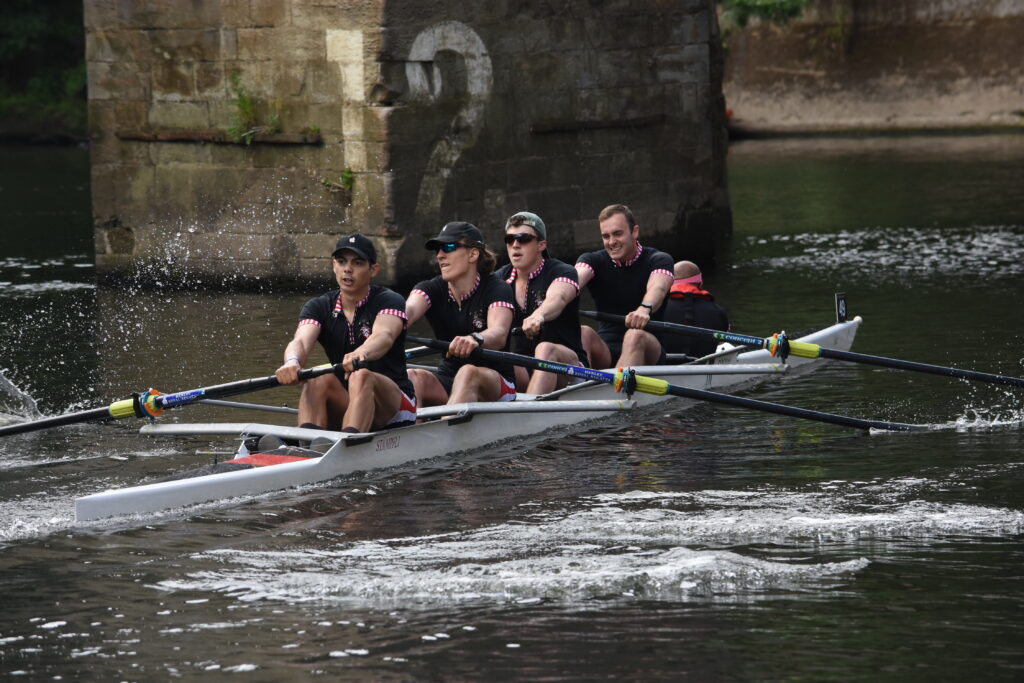 All the results from Saturday and Sunday are available in race order on the Competitors page.

A further consequence of the ban on indoor gatherings and the closure of the Gala Theatre, the usual venue for the Sunday evening prizegiving, was that winners were asked to collect prizes outdoors on the Racecourse after their race.

Thanks go to local retailers, including B&M, B&Q, Lidl, Tesco and Durham Distillery, who supplied personal protective equipment helping the Regatta to ensure compliance with Covid mitigations, to Alpha Security for providing security services and to NERAMS for first aid cover, as well as to the members of Durham School BC, St. Leonard’s School BC and Durham ARC for manning the stakeboats throughout the weekend, and of course to all the volunteers without whom the regatta could not have happened.

Aerial view of the trailer park

Feedback received indicates that those who attended enjoyed the opportunity of what for many was their first taste of competition for around 15 months, and had a very positive experience.