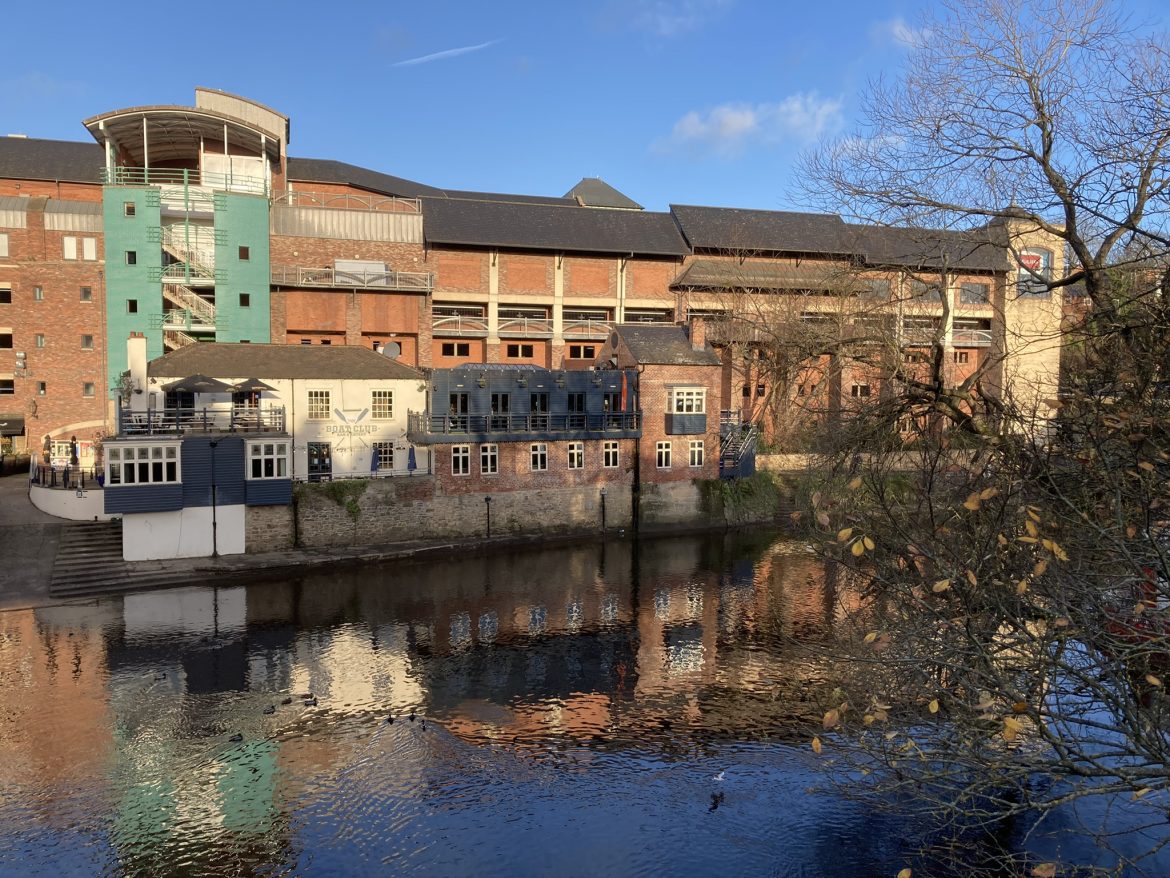 The City of Durham Trust celebrates its 80th anniversary in 2022, and to mark the occasion the website features every month a building, or heritage or green asset, that the Trust has been involved in protecting, preserving and conserving.

The first building chosen to receive the accolade, for January 2022, was Brown’s Boathouse on the north side of the River Wear in the peninsula area, next to the footing of Elvet Bridge and below the Prince Bishops carpark.

The Boathouse has a long association with Durham Regatta. Previously known as Paradise House the first floor and part of the ground floor were used as living accommodation while the remaining part of the ground floor was used as workshops. The premises were bought by John Hawks Clasper who commenced business there as a boatbuilder in 1863. Clasper was the eldest son of renowned oarsman and boatbuilder Harry Clasper, and went on to continue boatbuilding in London from 1867, building boats there for the Oxford and Cambridge University Boat Race. The story of his career is related in the second instalment of a two part article on Hear the Boat Sing entitled John Hawks Clasper, His Father’s Son. Part II: The Innovative Boat Builder

The story of his father Harry Clasper is portrayed in Ed Waugh’s acclaimed stage play Hadaway Harry which returns for a summer tour at venues across the North East and in London starting at the end of May.

The boathouse passed to the Brown family and boatbuilding for racing and pleasure was continued at Brown’s Boathouse by three generations of Browns, whose landing stage was also used by the Regatta until 1981 when the provision  of “Committee” boats for novice events was discontinued.

On the death of J Erik Brown in 1975 boatbuilding was continued by Erik Whiteley who revived the construction of high quality wooden racing boats at a time when the use of carbon fibre was becoming more prevalent. As well as building racing boats he replaced many of the hire rowing boats, and was a member of the Durham Regatta committee for around 20 years until the mid 1990s. In 1996 Durham Amateur Rowing Club purchased a pair of wooden fours from Browns, one of which was named ‘Erik Whiteley’ in his honour. Erik Whiteley died in 2018.

The Boathouse was saved from demolition in 2001 amid plans for the development of the Prince Bishops Shopping Centre (Prince Bishops Place) after the City of Durham Trust mounted a campaign supported by Clasper descendants opposed to the destruction of part of Durham’s heritage, pointing out the connection with the most famous rowing family ever produced by our country. The discovery of a water main next to the site, that would have caused insurmountable problems with foundations, led to plans being modified and developers instead decided to keep the Boathouse and convert it into a cafe/bar.