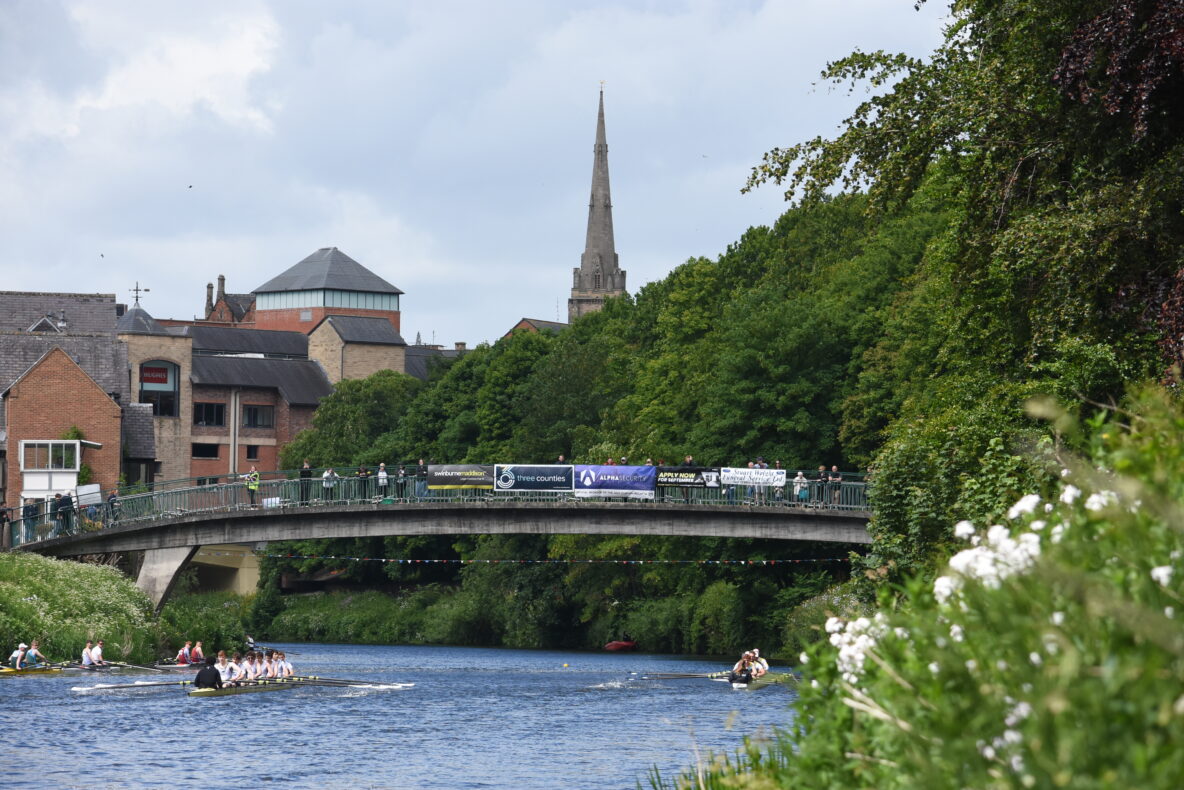 After 3 years of disruption the 189th edition of Durham Regatta returned to its usual format for 2022 on June 11th and 12th including competitive rowing, spectators and bankside entertainment. Although the weather tried hard to intervene with a strong breeze for most of the weekend making conditions difficult for competitors, the general view was one of relief to finally restore some normality.

Innovations included the ability for spectators to pay by card at entry gates and free live broadcasting on YouTube of the action in full on both days by PalTV.

The Regatta was pleased to welcome Alpha Security Group as co-sponsor. 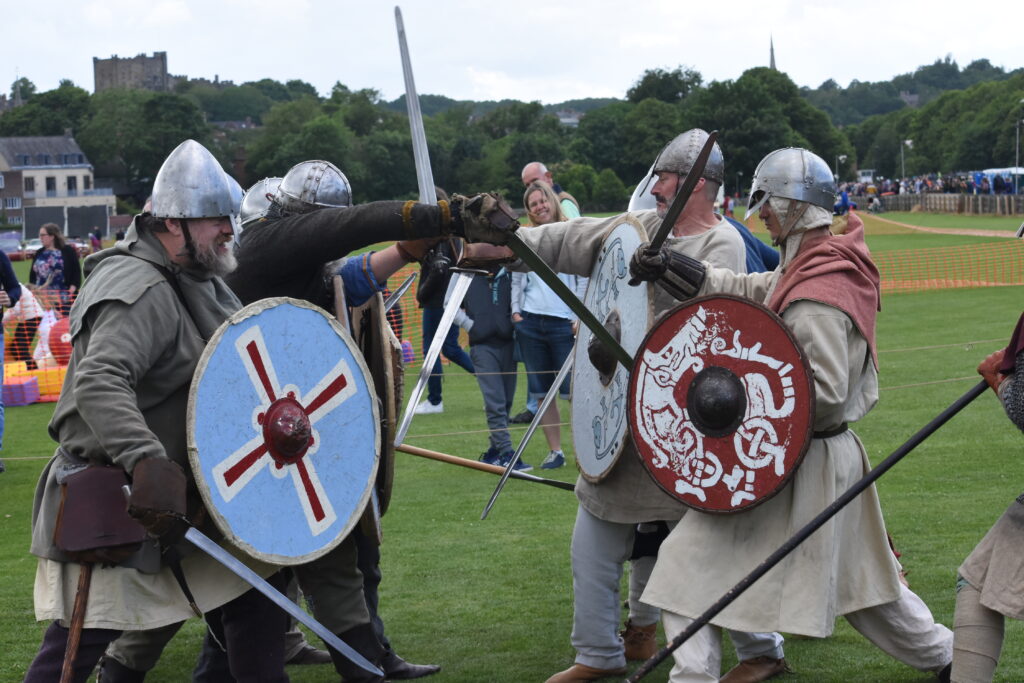 Attractions for spectators included the usual range of food and drink outlets, trade stalls and entertainments including musical performances, funfair rides, classic cars, and performers such as stilt walkers, a magician, street theatre, face painting and a bubbleologist. Sadly, the Punch & Judy man has now retired, but the Dunholm Viking re-enactment group set up camp on the Racecourse to provide demonstrations of crafts as well as exciting combat displays.

On the river racing got underway on time at 8am on Saturday and although falling a little behind schedule continued with a race starting every 2 or 3 minutes throughout both days. 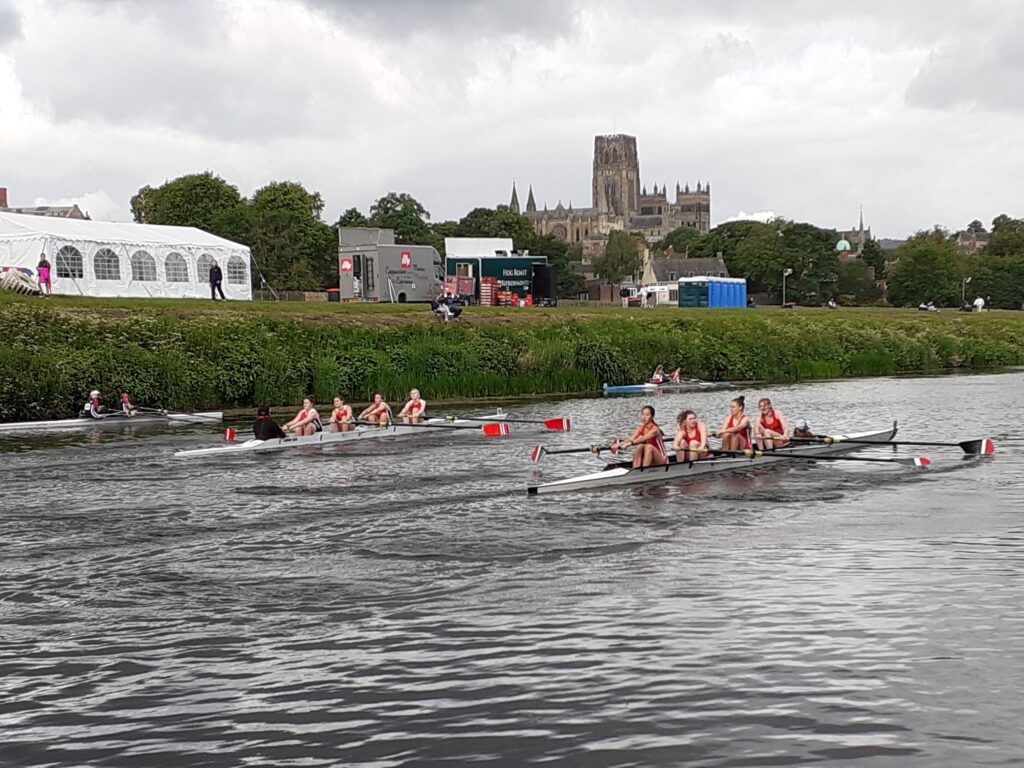 Local clubs and schools were well represented and were foremost among race winners, with the most successful being Durham ARC on 13 wins, followed by Yarm School with 12, Durham School 11, Tyne ARC 10, Chester-le-Street 9, and Queen Elizabeth High School 8 including composites. The Regatta was as usual well supported by all of the Durham Colleges with Collingwood gaining the most event wins with 3 to Hatfield’s 2, while Grey, University, Stephenson and St John’s College’s also achieved success. The Open and Women’s College 4+ were both won by Collingwood College, Stephenson College won the Open Maiden 4+ and St John’s College the Women’s Maiden 4+.

The most prestigious of the Regatta’s 57 historical trophies, the Grand Challenge Cup for coxed fours, went to Lancaster University Boat Club – one of 3 event victories for them this year – defeating Tyne Amateur Rowing Club by 1 length in the final over the Long Course.

Results for Saturday and Sunday racing can be found on the Results page. 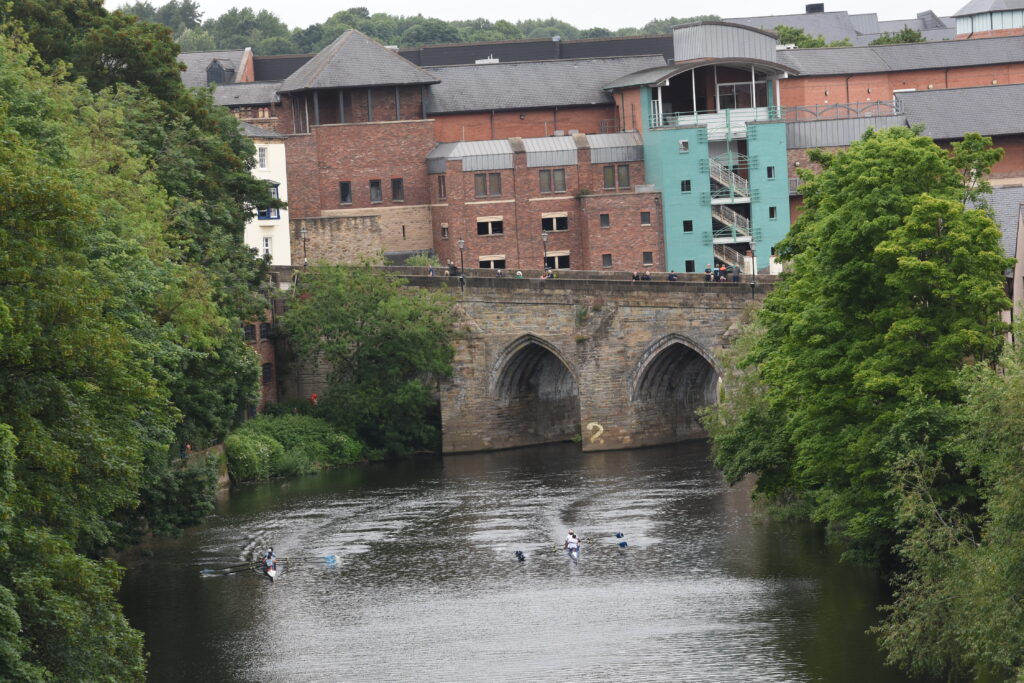 Fours on the Long Course

The British Rowing Masters Championships taking place at Nottingham over both days provided a rival attraction for Masters competitors which, as has been the case in recent years, meant fewer events offered for Masters to enter at Durham, and also a shortfall in availability of volunteers who are key to the running of a satisfactory regatta. With resources stretched remaining volunteers buckled down to ensure the Regatta went ahead.

Proceeds from the sale of the traditional Durham Regatta T-shirts went towards raising funds for the recovery of Van Mildert Boat Club following the arson attack that devastated the club’s boathouse last December.

Difficulties remain to be addressed, such as shallow water along stretches of the river, the spread of invasive species growing along the riverbanks, and Baths Bridge being unavailable for officials and spectators.

As ever we are indebted to the many volunteers who enable the Regatta to continue to thrive as it has done each year, with a few unavoidable exceptions, since 1834.